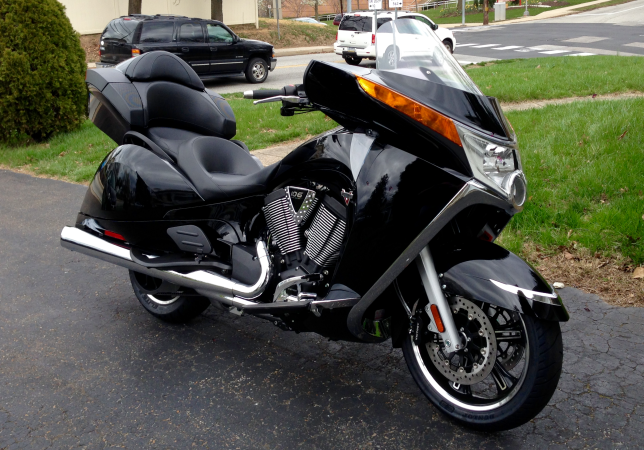 After discussion with Dennis at Trumbauers and quick review of the long-term weather forecast, I decided to order the Vision.  I constructed the configuration at the Victory Motorcycles site.

The site is generally well constructed and compelling, but they do need to work on the options packages: it allowed me to add overlapping items and some items that do not fit (really do not fit properly) on the 2016 Vision.  Fortunately, Lisa (Trumbauers Service Manager) knows me well; she called me to work out the details and the problem items were removed.

Dennis gave me about 2 weeks notice when it would be ready and I was counting the hours.  Saying goodbye to the Kingpin was difficult, but when I arrived and saw the Vision looking beautiful and ready to go, it got a bit easier.  The paperwork didn’t take long and I was on my way in less than an hour.

The Vision is large and in charge – the power pours from the Freedom V-Twin (106 ci – 1737 cc).  Once you get it above a walking pace, the Vision is maneuvers easily and is super responsive.  Even though the seating position low and comfortable, it’s still a bit tall for me (I have very short legs), but more on that later.

Leaving Trumbauers, I decided to take Rt 309 South – this gave a mixture of highway and small town riding.  Since the engine needs to break in, I was a bit cautious with the throttle; I generally kept it below 3,500 RPM (redline is above 5,000 RPM), but although there may have been one or two occasions when I wrapped the throttle.  It was amazing!

After so many years riding the same bike (Kingpin has been my primary ride since 2007), it will take a while to adjust to the Vision.

First and foremost, I need to get used to the sense of speed: 70-80 MPH on the Kingpin feels rather fast, but the Vision does it so easily, you might not notice.  There were several times when I checked the dials and realized I was going much faster than I realized or should be.  One thing had not picked up during the Vision demo rides was beautify & efficiency of the  instrument panel – it has all the information you need, arranged to easy to read at a glance.

Another transition from the Kingpin is simply the size: there’s just no way around it, the Vision is big.  At rallies, I can back the Kingpin into a tight parking spot between two other bikes, while barely looking; when I’m backing up Vision, or just walking forward while maneuvering, I have to constantly check all sides.  That knowledge of exactly where it fit will come in time.

I took the Vision to work the next day, which was my first ride on the Turnpike and also at rush hour.  In both the slow-moving traffic and the sections that opened up, the Vision took it all in stride, always feeling comfortable and at ease.

I was lucky with the weather in that pick up day was beautiful and the following day was still pretty nice, although it was overcast and drizzling in the morning.  Even though the morning rain was light, it gave me my first chance to try out Vision’s protection: the traffic to the Turnpike on ramp tends to be slow (15-20 MPH); when I felt some rain drops hitting my face, I hit the power windshield button to raise it an inch or so and the problem was solved.  This little feature will be huge on long road trips.

I’ve been waiting years to get the Vision and absolutely love it.  Here’s the just the facts wrap up:

Posted by RexRcr on April 3, 2016 in Motorcycle, Touring