Even though it was all interstate riding, this was still an enjoyable day.  I met a number of other bikers at rest stops and realized I am on the younger side of the motorcycle touring demographic.

I’ve become somewhat frustrated with online hotel reservations (I’ve been using Priceline).  It seems that about 1 in 5 nights, there’s a problem: no room available or wrong type of room (smoking vs non-smoking).  I’ve heard similar stories from other people, especially people on road trips.

I’m not sure where the fault lies – with the hotels or the online service, probably some of both – but the uncertainty causes stress I do not need when I’m on vacation.  I suspect the services are better for traditional vacations, scheduled well in advanced and with fixed destination.

For the end of this trip, I used the Motel 6 app, which worked well.  In the future, I’ll probably continue to use that app or locate hotels with Google and call the front desk to schedule a room.

One unexpected bonus on my ride home was the Enterprise Rest Area.  I pulled over for a quick stop, expecting basic, hopefully clean, facilities, but what I found as basically a small and beautiful park. 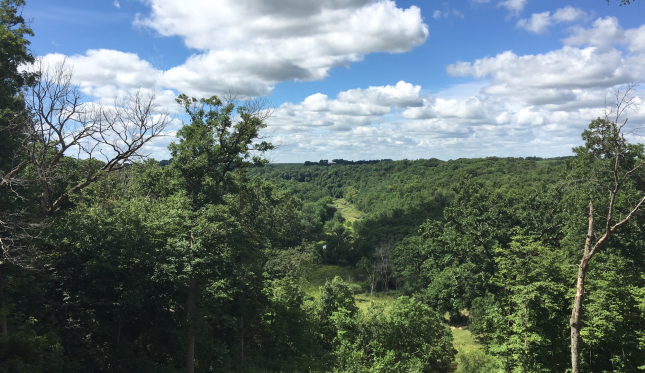 This was the longest ride of the entire trip – I normally try to keep riding days in the 400 to 600 mile range, but stopping 77 miles from home just didn’t make much sense.  At least the second half was all PA Turnpike; I driven this road so many times, it feels like home the first time I pull into a service plaza.

It was almost midnight when I arrived home.  I was exhausted it, but it was a great trip. 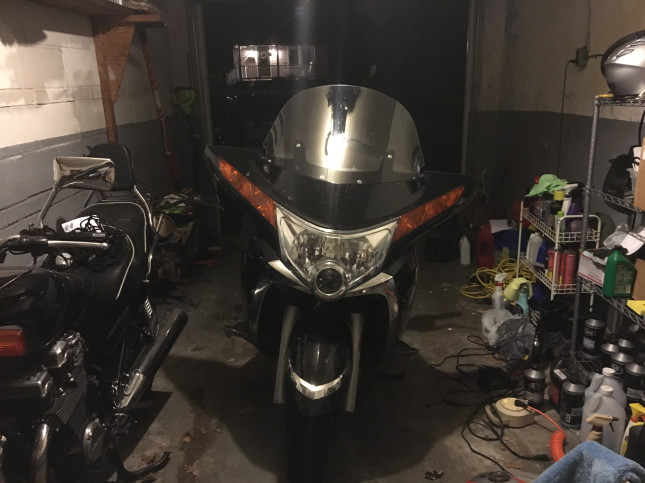 Posted by RexRcr on July 2, 2016 in Motorcycle, Touring, Vacation

I’ve ridden between Columbus and home many times, but there were two important differences on my previous rides: it was summer and the ride started before noon.

When I’m on vacation, I almost never set an alarm, but generally wake up at a reasonable time.  This Wednesday, for some unknown reason, I didn’t wake up until after 11 AM and didn’t get on the road until almost noon.

I reached the PA turnpike very late in the afternoon and the temperature was dropping rapidly.  The line of storms, which I had spent so much time avoiding, was the leading edge of a cold front, so I had dressed for chilly riding: Grand Canyon sweatshirt, riding jacket & gloves.

As night fell, I was still in central PA, almost 3 hours from home.  The problem with riding in the cold is that it is can be quite draining and I could feel myself getting drowsy.  I could have ridden for another hour or so, but it was clear I wasn’t going to make it home that night, so it didn’t make sense to continue riding.  Central PA is a rural area, but I was able to find a room in Chambersburg.

The extra stop created a real problem as I had used up all my extra time for this trip and was supposed to be back at work Thursday morning.  As soon as I got to my room, I emailed the office to let them know I would be a day late.

My company, MEI, is generally understanding about my road trips and allows me flexibility on the schedule.  They are so amazing that in 2008, they let me ride cross country as part of a business trip.   On this occasion, however, arriving late was a problem as my boss would be on vacation the following week; I needed to meet with him on Thursday to get updates and prepare to act as his backup.

It was critical that I get to the office as early as possible so I set the alarm, got on the road at a reasonable time, kept my stops to a bare minimum and went directly to the office, rather than going home.  I arrived a little after 1 PM which allowed me enough time to take care of business.

Even though this has been a great trip, I have never been this far off schedule.  My plan contained 3 slack days (including the decompression day) and, at the half way point, I was expecting to be home Monday evening and back at work on Wednesday (a day early).  Avoiding the weather, cost me about 1.5 days, but the rest of the time was spent at various locations and with friends.  The plan for my road trips tends to be vague so I can make changes on the fly, but in the future, I’ll have to keep closer track of the time remaining and how far I am from home.

Posted by RexRcr on September 20, 2012 in Motorcycle, Touring