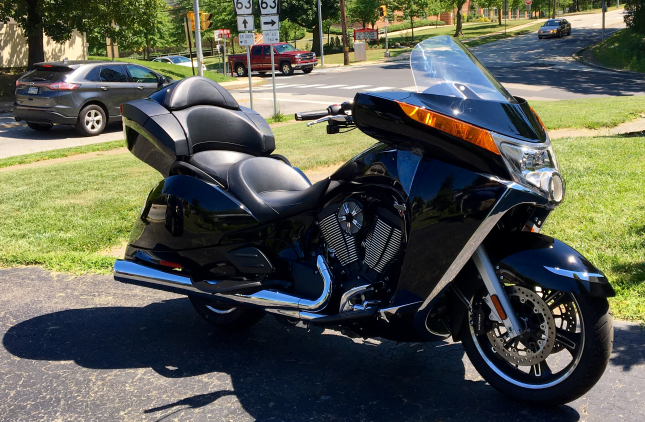 Before any long trip, my bike goes into Trumbauer’s for a check up but this time it got some upgrades too: iPod connector, lowering kit (down 2″), and HID driving beam.

The iPod connector, along with Lightning to 30-pin Adapter, allowed my old iPhone 5, and its replacement (iPhone 6s), to play thru the speakers and work with the controls.  The iPhone 5 fit easily in the compartment but the 6s, with the adapter, is a bit tight.  Hopefully an iPhone specific cable will be available in the future.

The lower kit made a big difference and not just because my legs are so short.  The bike is lowered by changing out a bracket (dog bone) which changes the angle of the bike.  The lower angle feels more controllable and less susceptible to cross winds; John, from Trumbauer’s told me this might be the case and he was right.  It’s also nice to be able to put both feet down flat.

I haven’t done any night riding with the HID driving light, but even it the daylight it looks like a small sun coming at you.  I’ll try to capture a good video on my trip.

Dressing Up the Bars

I’ve added a number of polish pieces on and around the handlebars: reservoir covers, control accents, and bar ends.  I also added round mirrors for added visibility.  This is one area where the Vision could be improved: even though the stock mirrors are large, I haven’t found a position they give all around visibility.  Even though they are cheap, stick-on type, the round work well and look good.

Many of the parts came from VictoryOnly, which I’ve ordered from before; they have a great selection and I’ve never had any problems.

I also ordered parts from WitchDoctors (for the first time).  They have a smaller parts list, but everything I ordered was high quality and the web site is great.  I especially appreciated the details about what was in-stock: one of the parts was backordered,which showed on the order page, along with an estimate of availability; I also received 2 updates on availability after I placed the order.  Their customer service is also excellent: the reservoir covers are not symmetric so I needed one of each, but ended up with 2 identical covers – packaging was mislabeled, it happens.  When I contacted them, they very helpful and the matter was quickly resolved.

In addition to the store, they have a number of helpful videos on their YouTube channel.  If you are looking for Victory accessories you should definitely check them out.

After so many years with the heel shifter on Kingpin, I wanted something similar for the Vision.  I did a bit of research and found a number of people who felt the KewlMetal heel shifter was much better than the Victory / Arlen Ness version, so I ordered it.  The next [business] day, my order status changed to Processing and I figured it would ship soon after.

Ten days later, it was still at the same status so I emailed them and got no reply – a bad sign.  I gave it a few more days, regularly checking the order, then emailed again – still nothing.  Now I was concerned & frustrated, so I called the shop; their voicemail message said they were in the process of moving their shop and orders would be delayed.

It would have been nice if they had let me know, but I sent a third email saying I understood they were moving and asking for a general idea of when the order would ship.  This time I got an apologetic reply indicating they expected to start shipping out orders the following Monday – I was (foolishly) relieved.

Monday came & passed, with no shipping information.  A few days later, I checked the site again – no changes, other than a warning that their site certificate (used for secure communications) had expired.  A few days later the site disappeared completely and all subsequent emails have bounced.

After a little searching, I found that ordering problems are not new, but was not able to determine the status of the business.  The common wisdom seems to be that their parts are high quality, but customer services is poor.

I ordered the Victory heel shifter and it arrived a 2 days later.  I understand the concerns some people expressed about finding the narrow leveler with their boot, but it only took a weekend for me to get used to it.

I still have to figure out how to get my money back from KewlMetal.  Maybe I should stop by their shop on my next road trip, which should be starting in the next day or two.

Posted by RexRcr on June 19, 2016 in Motorcycle, Touring, Vacation

Music by Boogaboo.  See the video here.  Buy it here.

Posted by RexRcr on September 23, 2012 in Motorcycle, Slideshow, Touring